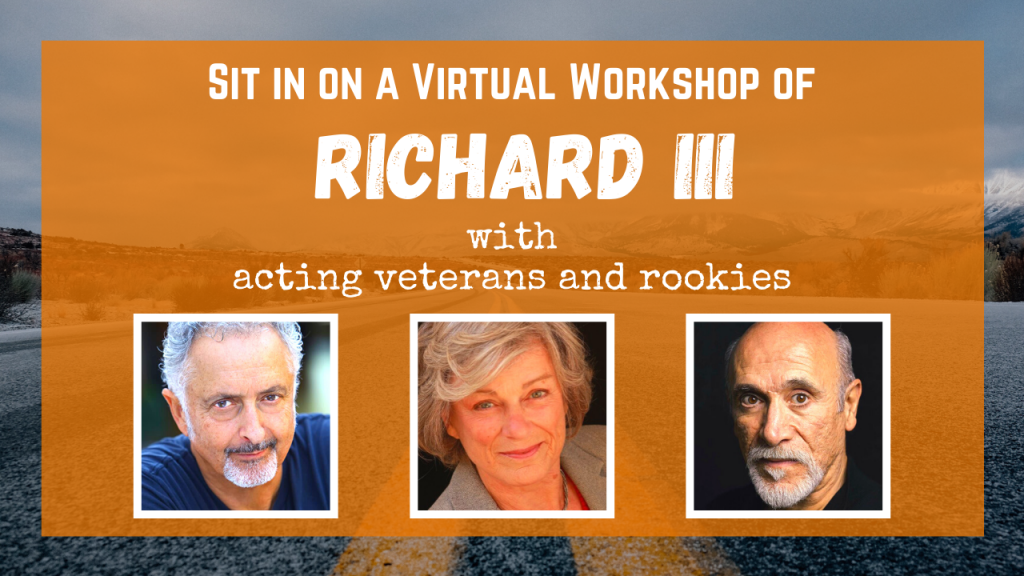 I’m excited to invite you to sit in on a NEW online event happening LIVE on Thursday, June 18th: we’re doing an open workshop of Shakespeare’s Richard III, bringing together both veteran and rookie actors!

First up are a couple of scenes from Shakespeare’s Richard III with Tony Amendola (ep 18) as Richard, Marcelo Tubert as Clarence, and Anne Gee Byrd (ep 3) as Queen Margaret. We’ll also be joined by a trio of younger actors (playing Brackenbury, Elizabeth, and the Duchess), along with dramaturg and teacher Gideon Rappaport!

And as you know from acting class: you learn as much from WATCHING others as you do from performing, so it’s going to be a great chance for you to sit in and learn from the actors as they work through the scenes and to ask your questions of both them and the dramaturg.

Get your tickets now!

So how did this all come about?

It’s based on your feedback as well as from the actors in the recent online Shakespeare readings we did! I wanted to create opportunities for the veterans to exercise their acting muscles and for the “rookies” out there (those who are in the beginning years of their career) to work on scenes with those who have been working professionally for decades, including many of our podcast guests!

The goal is to kinda create the same situation for others that I had as a young actor: working with and learning from some really amazing and talented folks who were much further along than I was. I believe there’s a unique opportunity to pool talents right now, and to also help those “stuck at home” by creating extraordinary opportunities to learn and play.

This is like an updated take on John Barton’s Playing Shakespeare series! (see clip below) They had Ian McKellan, Patrick Stewart, Judi Dench and many more wonderful actors from the RSC; well, we can do that too with equally excellent actors and bring in the next generation of artists!

As I’ve heard over and over during the podcast, so much of this tradition is passed down by watching and learning from other actors, so that’s exactly what I want to create here, especially during this time when the arts and theatre have been so changed.

And if you would like to ACT in a future workshop, be sure you’re on the email list—sign up below! Something else to think about: premium members of the show get first pick of the acting spots and also have early access to register. Membership starts at just $2/month.

I’m so excited to bring all these wonderful folks together for the workshop; I know firsthand what an amazing chance it is to work alongside such talented artists! I Hope to see you at the Richard III workshop on Thursday, June 18th!

Join us for the Richard III workshop!