The following is the text work session taken from the full episode with Randall and Annie.

In this episode, Randall and Annie share insights into working on Shakespeare through the appropriately chosen piece, Hamlet’s “Advice to the Players”—the one that begins “Speak the speech I pray you”.

Plus we chat about why “updated” productions of Shakespeare can make the audience feel distant, and instead, how to make it exciting!

This is such a great session and it was so fun to hear them share how the texts are really like musical scores for actors—showing you how to make sense of these works and perform them! These two are amazing teachers and have so much to share! 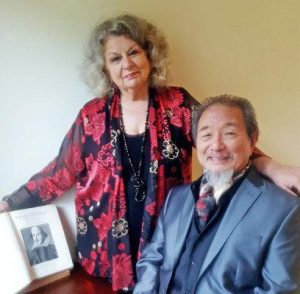 Randall Duk Kim has been acting professionally for 50+ years, playing dozens of leading roles in everything from Shakespeare to Moliere to Chekhov to the Greeks—acting at major theatres all around the world, from Honolulu to Vermont to Singapore! If I start listing everything he’s done, we’ll be here all day!

He has also amassed an impressive amount of notable film and TV credits over the last 25 years, including as the “Keymaker” in The Matrix, “Master Oogway” in the Kung Fu Panda franchise, and as the “Doctor” in the John Wick films. He has received an Off Broadway Obie Award for “Sustained Excellence of Performance”

Annie Occhiogrosso has worked as a director, dramaturg, acting coach and actress. She was co-artistic director of the American Players Theatre and received national attention for her body of work there, directing 16 Shakespearean plays along with works by Moliere, Ibsen, Plautus, and Chekhov.

She has performed the roles of “The Nurse” in Romeo and Juliet, “Gertrude” in Hamlet, “Natalya” in The Proposal, “Madame Arkadina” in The Seagull, “Jocasta” in Oedipus Rex and “Anna Petrovna” in Ivanov
Annie has taught at the Stella Adler Conservatory of Acting and at the New York Shakespeare Festival.

Want to hear more from Randall and Annie? Check out my full talk with them here!

Randall Duk Kim and Annie Occhiogrosso around the web

Their PBS episode: Our 40 year Love Affair with William Shakespeare

Speake the Speech I pray you, as I pronounc’d
it to you trippingly on the Tongue: But if you mouth it,
as many of your Players do, I had as liue the Town-Cryer
had spoke my Lines: Nor do not saw the Ayre too much
your hand thus, but vse all gently; for in the verie Tor-
rent, Tempest, and (as I may say) the Whirle-winde of
Passion, you must acquire and beget a Temperance that
may giue it Smoothnesse. O it offends mee to the Soule,
to see a robustious Pery-wig-pated Fellow, teare a Passi-
on to tatters, to verie ragges, to split the eares of the
Groundlings: who (for the most part) are capeable of
nothing, but inexplicable dumbe shewes, & noise: I could
haue such a Fellow whipt for o’re-doing Termagant: it
out- Herod’s Herod. Pray you auoid it.
Be not too tame neyther: but let your owne
Discretion be your Tutor. Sute the Action to the Word,
the Word to the Action, with this speciall obseruance:
That you ore-stop not the modestie of Nature; for any
thing so ouer-done, is frõ the purpose of Playing, whose
end both at the first and now, was and is, to hold as ‘twer
the Mirrour vp to Nature; to shew Vertue her owne
Feature, Scorne her owne Image, and the verie Age and
Bodie of the Time, his forme and pressure. Now, this
ouer-done, or come tardie off, though it make the vnskil-
full laugh, cannot but make the Iudicious greeue; The
censure of the which One, must in your allowance o’re-
way a whole Theater of Others. Oh, there bee Players
that I haue seene Play, and heard others praise, and that
highly (not to speake it prophanely) that neyther hauing
the accent of Christians, nor the gate of Christian, Pagan,
or Norman, haue so strutted and bellowed, that I haue
thought some of Natures Iouerney-men had made men,
and not made them well, they imitated Humanity so ab-
hominably.