We continue with season two and today on the show is Francis Guinan, a Chicago-based actor who has been a part of the Steppenwolf Ensemble for over 30 years and been in more than 40 shows with them.

In fact, you can see him onstage in the world premiere DOWNSTATE by Bruce Norris until November 18th in Chicago and then the cast heads to the National Theatre in London. I actually saw the show back in October and like much of the work Steppenwolf produces, not only does it entertain, but it challenges you—it asks really uncomfortable yet important questions, all while delivering a first-rate production and they truly do some of the best theatre around. Go if you have the chance, either in Chicago or London!

Just a bit of what we cover in this episode:

Plus, Francis works on a piece from THE REMBRANDT, which had its world premiere at Steppenwolf! 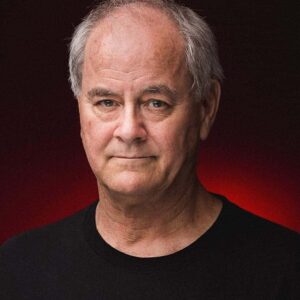 Francis Guinan grew up in Iowa and went to Iowa State to study pre-med, but changed directions and went to Michigan State and then did graduate work at Illinois State in theatre.

He was in Minnesota doing theatre and improv, and then got a call to join a few college classmates in a production in Chicago. This was the beginning of Steppenwolf. He has been an ensemble member for 30 years and a few notable productions with them include Balm in Gilead (which we discuss a bit), True West (directed by Gary Sinise, and with Jeff Perry, Laurie Metcalf and John Malkovich), The Grapes of Wrath and August: Osage County, (both of which went to Broadway), and The Seafarer.

He’s also performed at numerous other theatres in Chicago including the Goodman, Court, and Victory Gardens Theatres, as well as at the Mark Taper Forum in LA. He has over 85 credits in film and tv, including as the Governor on Boss with Kelsey Grammar, the movie The Last Airbender, and as a series regular on the show Eerie, Indiana. He was also part of the inaugural group as a Lunt-Fontanne Fellow.

Want to hear more from another Lunt-Fontanne fellow? Check out my talk with Nike Doukas!

Francis Guinan around the web

Francis’ monologue from The Rembrandt by Jessica Dickey

It was… surprisingly– spiky.
The paint.
Slashes of ochre
and black
and white
and red.
I suddenly thought–
Art is such a slight thing.
It’s a trick.
The closer you get, it recedes, like a shadow.
It lives, it glows, and then you touch it and it’s not really there.
Or it’s ALL there—Rembrandt. Homer.
I touched it all…
Well, specifically three of us touched it—myself, this girl Madeline and Dodger.
We counted to three, and we touched it.

HENRY
I remember my Dad reading in the paper that this Rembrandt had been purchase for 2.3 million– and this was 1961 mind you!–and he turned to me, I was all of FIVE, and he said (ala gruff dad) “Come on Hank, we’re going to see what the hell is worth 2.3 million.” And he dragged me to the exhibit. We stood in front of it, his brow furrowed, the callouses on his hand… There was something about the way he stood there—staring—as if he felt separate—as if it was some Great Thing that would always be just beyond his reach…

I never asked him what the thought of it, the painting.
If he liked it.
If it pleased him.
(I’d like to thing it did—that somehow he was—touched by it.)
I regret that actually.
Terribly.

I stood there today, and I thought,
There is only one of this– in all of time.
I touched that fragility
and my heard just…

[to Simon, sleeping] My love? Are you there?

I want you to know.
You’ve been
a wonderful
partner.
You have.
I have failed you so terribly.
So terribly.
But I am here now.
I’m here.