The following is the text work session taken from the full episode with Tony.

In this excerpt, Tony discusses Sonnet 130 by William Shakespeare. As Tony shares, it’s almost like an “anti-love” sonnet, that it makes fun of sonnets that are too flowery, as it has a very different tone and style with its message.

It’s a great session, and Tony also shares at length the balance you want to find between ideas and behavior when working on texts like this! 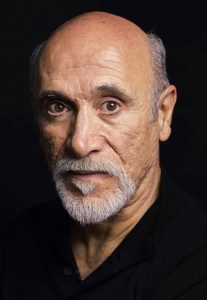 Tony Amendola grew up in New Haven, Connecticut into a blue-collar family. He was the first member of his family to attend college, graduating from Southern Connecticut State University and then receiving his MFA from Temple University.

He has over 120 credits on film and TV, including as a series regular on Continuum, and recurring work on Stargate SG-1, CSI, Dexter, and Once Upon a Time as Pinocchio’s father Geppetto.

He’s appeared as the title character in Uncle Vanya and King Lear, as King Henry in Lion in Winter, and as Shylock in The Merchant of Venice.

Voiceover work includes video games World of Warcraft, Final Fantasy 15, and Call of Duty, and as the narrator of The Land Before Time XIV.

Want to hear more from Tony? Check out my full talk with him here!

Tony Amendola around the web

My mistress’ eyes are nothing like the sun;
Coral is far more red than her lips’ red;
If snow be white, why then her breasts are dun;
If hairs be wires, black wires grow on her head.
I have seen roses damasked, red and white,
But no such roses see I in her cheeks;
And in some perfumes is there more delight
Than in the breath that from my mistress reeks.
I love to hear her speak, yet well I know
That music hath a far more pleasing sound;
I grant I never saw a goddess go;
My mistress when she walks treads on the ground.
And yet, by heaven, I think my love as rare
As any she belied with false compare.